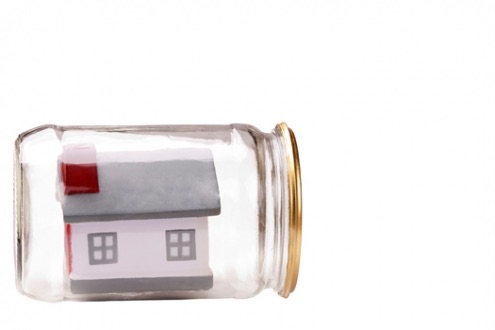 The Hampstead downstairs works well as the setting for a small one-bed flat.  There’s also that nice reveal at the Hampstead downstairs where your taken into the theatre space.  The stage floor was made of pennies, and some were becoming detached, falling to the floor. This set the scene for a play about saving every penny and the effect this has on two professional couples.
The play is basically about two couples who move into flat as a way of saving money, so after a year they can put a deposit down on a flat of their own.  Mel and Rachel have been friends since university, and they talk their partners into the scheme. The sharing starts as fun, but as time passes things become tense.
Conversations can be overheard. People can’t use the bathroom when they need to get to work.  Toilet habits become frustrating.  Sex becomes problematic in such a small space. Things become cluttered. Boundaries are crossed.
One thing I enjoyed about the production was that the time passing and the tension that arises is represented through dance and movement.
The problem with the piece was even though the issue of house prices in London is clearly a real one for many young people, it didn’t warrant some of the responses the play presented.
The play portrays a generation, that can’t get s foot on the property ladder. The cost of living in London is so bad that the couples cannot enjoy London.
Having to commute or relocate for some people is a reality as well.  The fact the marketing professional is paid more than a teacher is something that does lead to the question that if teachers’ salaries remain this low who will teach the children in London. However, ‘I can’t believe those words came out of you mouth approach’ was rather over the top, or some the rant about Stevenage doesn’t give support to the issue of high London property prices.  They are not dreadful alternatives.
Much if the dialogue is stilted, and often preachy, to the point I didn’t care about the couples and what happened to them.
Further Information http://www.hampsteadtheatre.com/whats-on/2015/deposit/