There are times when I go to the theatre and at the time I realise that I am watching something special and something that I’ll remember for some time. Seeing Robin Soans’ Crouch Touch Pause Engage is going to be one of those plays.  It is an excellent piece of theatre which is both harrowing and hopeful.

This is the story of the Welsh Rugby player, Gareth Thomas (Alfie) and the town of Bridgend. The story of Thomas and his professional and personal story,  is juxtaposed alongside the story of young people self harming in Bridgend.  Thomas as he grapples with whether to come out as gay,

The real strength of the piece is Robin Soans‘ lucid storytelling and the excellent acting from this Out of Joint Cast. Written after interviewing participants, Soans clearing captures the voices, and personalities of the people being portrayed.   The observation is precise.

The set is a locker room, but it also becomes many locations such as the rugby pitch, hospital, night club, school and homes.  All the actors play Thomas, who is known as Alfie in the play.  This approach is enormously effective and is signalled by passing the rugby ball and putting on Thomas’s rugby shirts.  I really believed that a young woman was Thomas the way this was done was done so well.

It felt like every word contributed something.  There is no padding or cliché. Crouch Touch Pause Engage are the actions before a scrum, but also reflect the physicality of the piece. One where thought is important.

The production is touring before arriving at the Arcola in London in May. 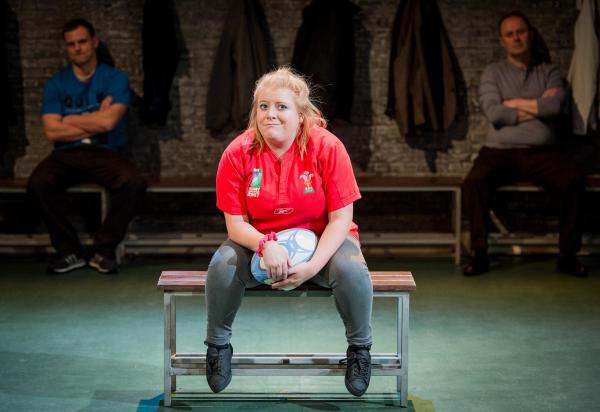