The vision behind the RSC Long Ensemble was for a group of actors to work together for a sustained period of time to produce work. It seemed fitting then, at the end of the Stratford run and two and half years together the long ensemble got together and put on a Gala in the newly opened Swan Theatre. The event was to support the needs of long ensemble member James Gale and it was a bringing tougher of the company in one place.  The event was organised by company members Kelly Hunter and Hannah Young.

This was a special event, but it was particularly relevant in that it shared a moment with a regular RSC audience in a way that is often spoken about in moving to the thrust stage, but only partially happens  in the Shakespearean productions. The production acknowledged an audience that has followed the work over the two and half years and so there were a lot of in jokes and even mentions of regular audience members.

The Gala started in the foyer with actors collecting money and characters taking on their character roles such as Brian Doherty as Autolycus selling souvenirs from the RSC shop and Sophie Russell as the tap dancing nun from The Comedy of Errors. As the audience entered the Swan, Peter Peverley played his guitar and sang some songs including The Jam’s Town Called Malice. Our compare  for the evening was Eunice the usher who opens Romeo and Juliet, but as the evening progressed, Eunice abandoned parts of her costume to reveal Noma Dumezweni the wonderful RSC actress. At times Noma had a little helper (her daughter), who was not phased at all by being on stage.

Katy Stephens ran the auction of promises and handing out punishments to her son if the auction did not raise enough each time. There were some references to Gloucester’s blinding, but it backfired on Katy in the end as she ended up with a foam pie in her face (and we didn’t see that coming). Promises ranged from dinner for two at the Dirty Duck, and a family pass to Warwick Castle to helping the stage management team put on a production of King Lear and a chance to row Juliet (Mariah Gale) down the river.

The evening was a mixture of comedy and song. There was Christine Entwhistle’s very funny and very rude hunting routine and Richard Katz’s failing magician routine.  We saw characters as we’d never seen them before such as the knights from Morte D’Arthur in a very funny rendition of Lily White and Adam Burton’s hilarious Klauzz with Cleopatra’s attendants Iras (Samantha Young) and Charmian (Hannah Young) performing a German electro pop routine. Jonjo O’Neill performed Mr Bo Jangles and Simone Saunders sang Destiny. There were other appearances from ensemble members including Greg Hicks, Geoffrey Freshwater, Sandy Neilson, Patrick Romer, Sophie Russell and many more. 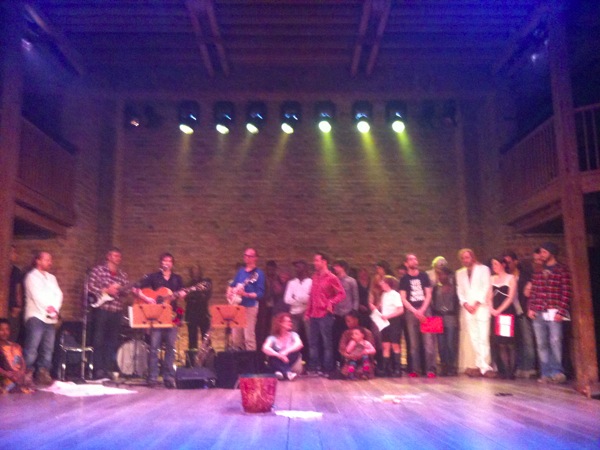